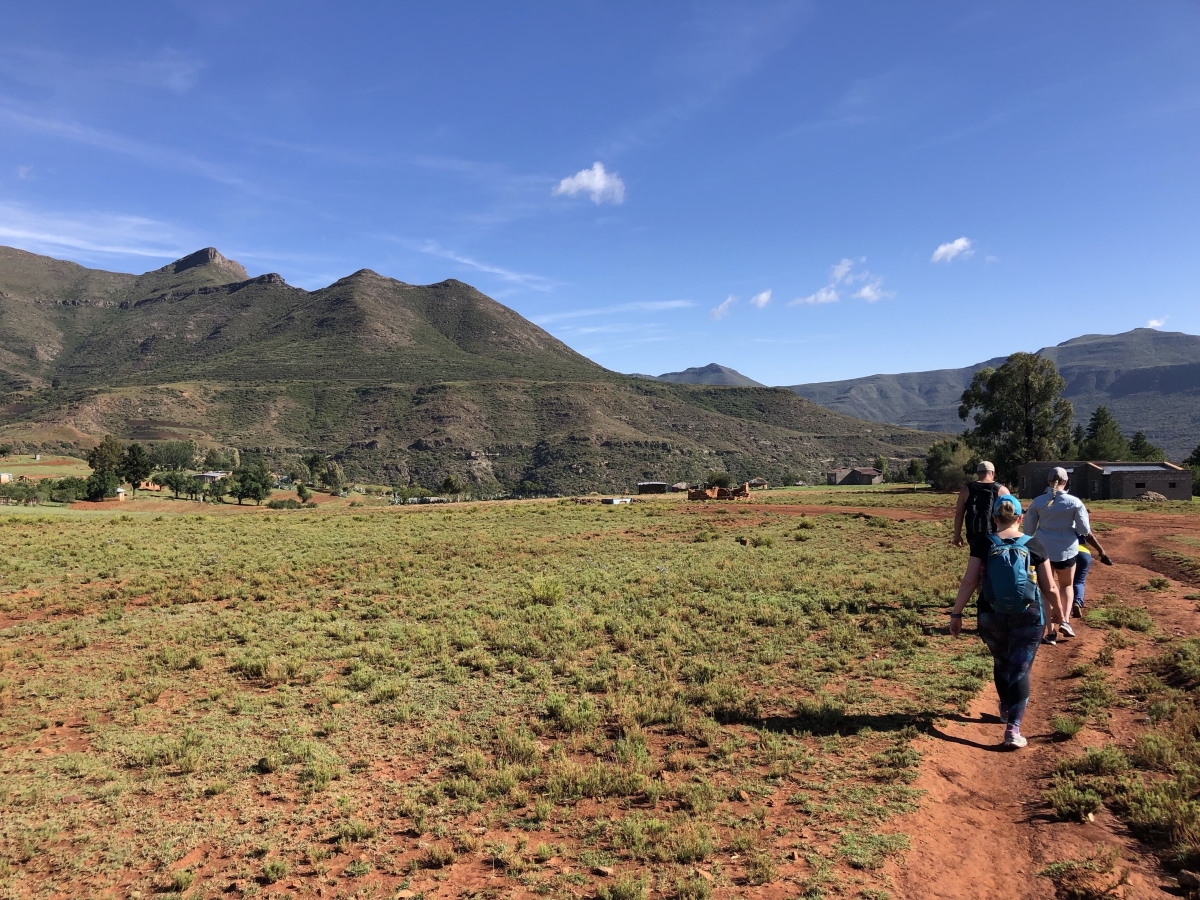 Some places just feel magical from the moment you arrive. Malealea in Lesotho is one of them.

Known as the Kingdom in the Sky, this mountainous country was born out of a fierce defiance of European colonization. Two-thirds of this rugged country is mountains. You can even ski in Lesotho, something we don’t often associate with Africa. The rugged landscape has plenty to interest an adventurous hiker.

I’ve always been intrigued by this tiny ‘island’ nation due to its unique location.

It’s smack dab in the middle of South Africa. The two countries’ relationship is similar to a family – bound for life but not always the best of friends. I visited for a couple of days last December on an overland tour of South Africa with Intrepid Travel. 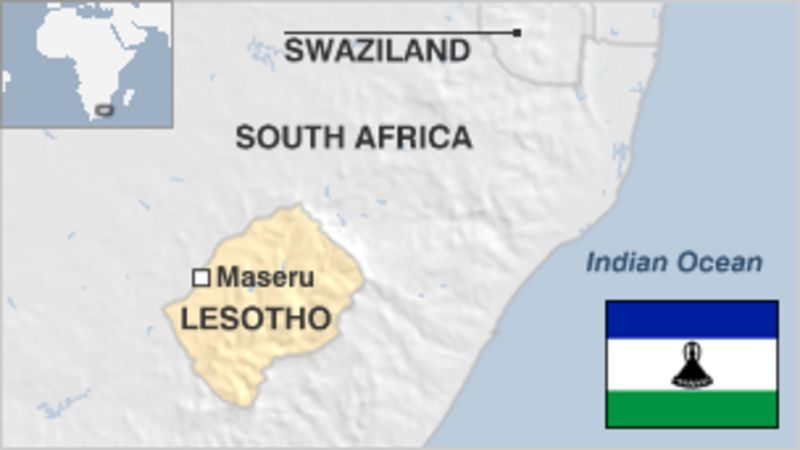 Crossing over to Lesotho from the Durban side of South Africa requires offroading over 2000 meter Gates of Paradise pass.

This area has a history that includes the Boer War as well as a visit by the Royal family – albeit the King and Queen of England never made it over the pass. Although that’s probably a good thing as this warning sign can attest. 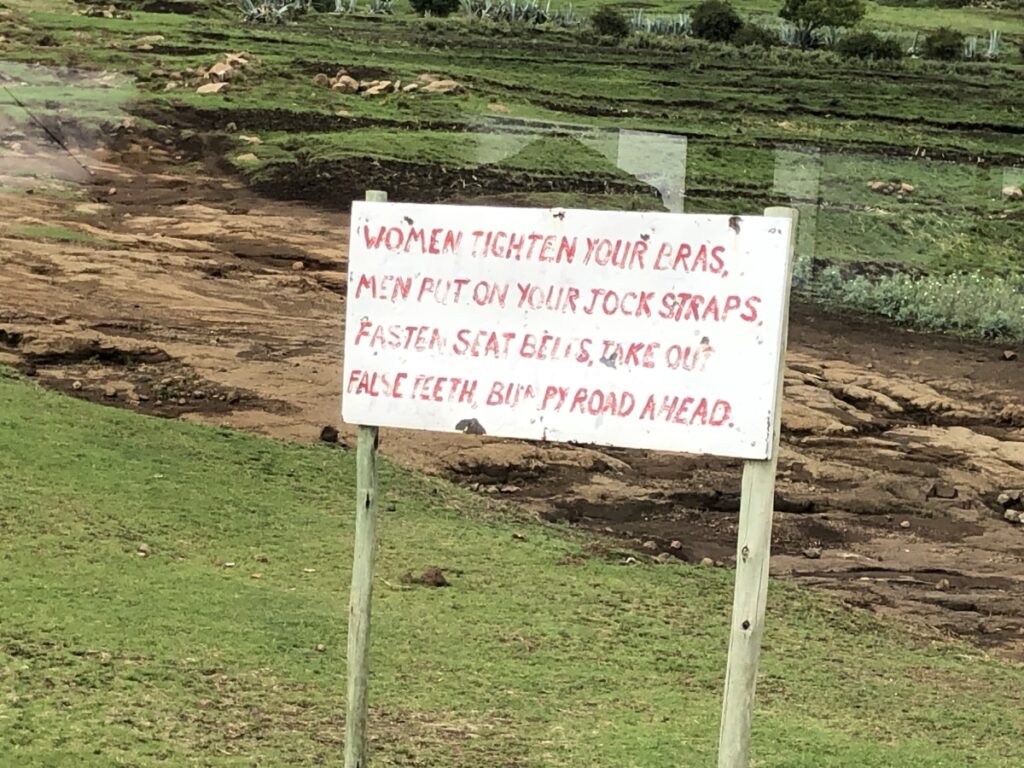 The Lodge in the small village of Malealea, where I stayed, is set in the Makhomalong Valley surrounded by the rugged Maloti Mountains. 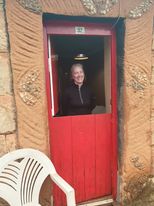 As soon as we entered its gates, I felt happy. The original founder, a transplanted Brit, was known for his hospitality. He fell in love with this spot while camping and decided to stay. Malealea began as a trading post in the early part of the last century and has remained a focal point of the valley since then. In fact, it was a trading post until 1986 when it was bought by the couple who turned it into a lodge.

It’s the kind of place where the generator goes off at 10 pm and everyone convenes at the bar to swap the day’s adventures. 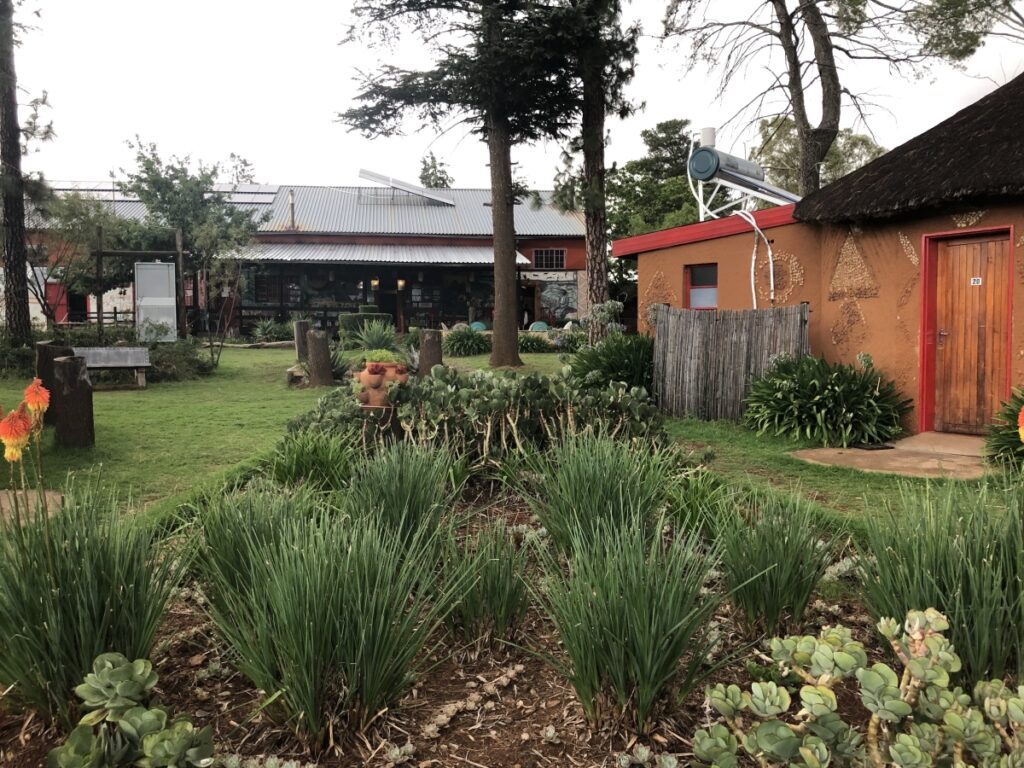 Lesotho is poor and was hard hit by the Aids crisis, leaving many orphans.  So the founders of the current lodged formed the Malealea trust. The trust focuses on education and small business. The locals are a proud and integral part of the success of the lodge. 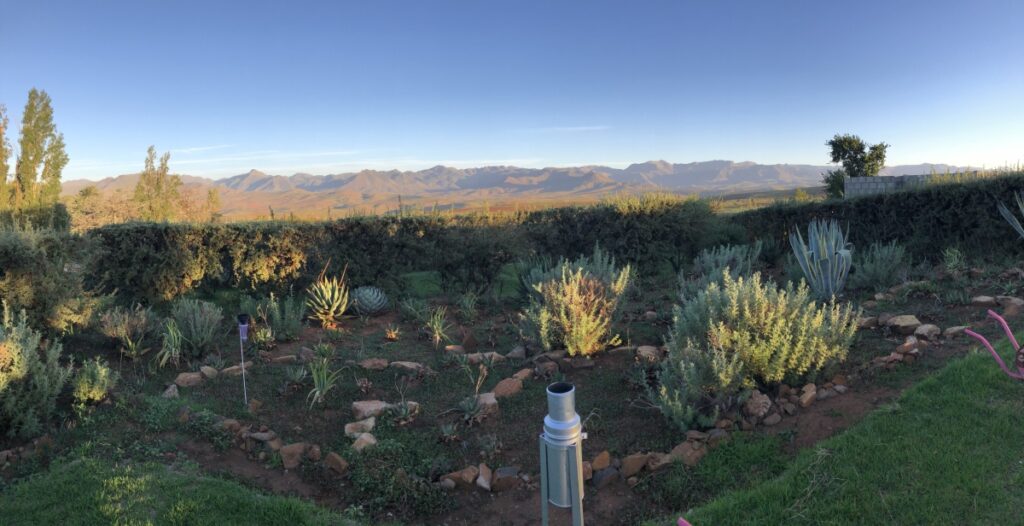 Malealea sits atop a hill surrounded by farms where Basotho herders in traditional headgear and blankets mind Mohair goats, sheep, and cattle. 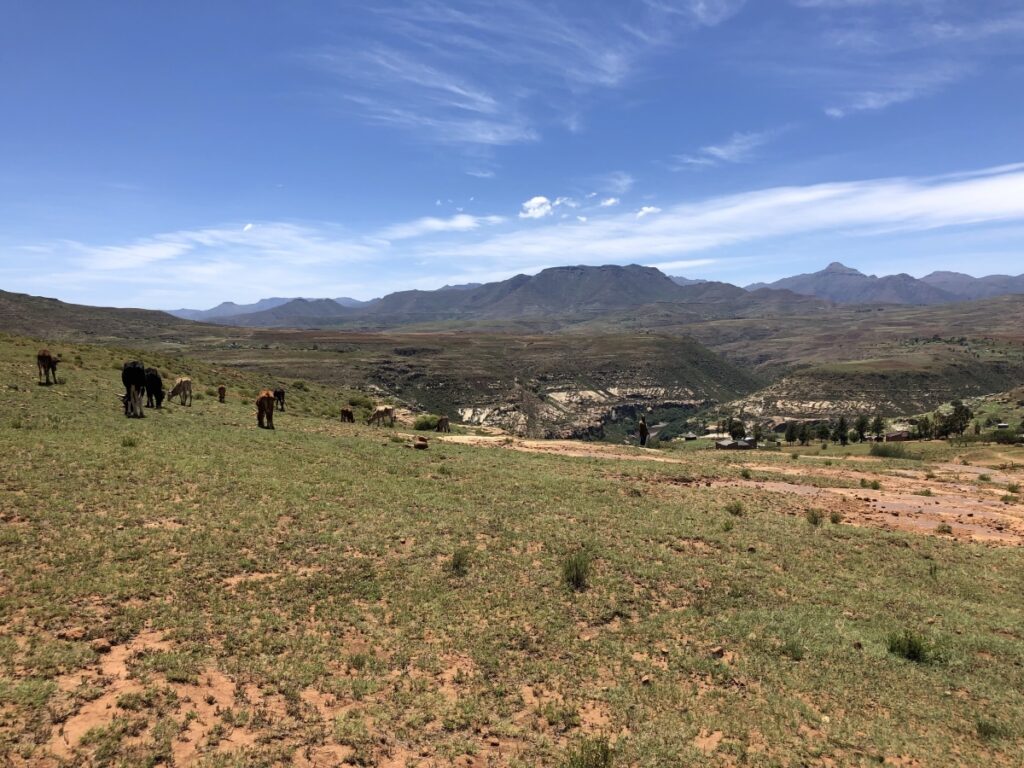 Tours offered to Malealea village are meant to foster an exchange between locals and tourists.

You can visit the local historical museum, shop local handicrafts, or my favorite – visit the beer lady – a local widow who makes her own high-powered brew that’ll turn your cheeks rosy. 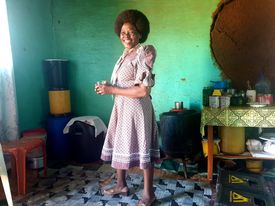 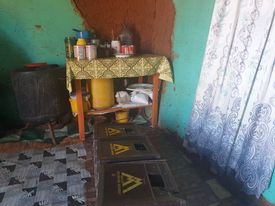 When I was there in December 2019, Malealea Lodge offered pony trekking and hiking.

The choice of hikes went from easy to hard. I’d like to say I took the hardest one…but the Drakensberg Ladders hike was still fresh in mind and body. So I opted for the middle hike of about 16k to Batsoela Falls and Bushmen Caves.

At the height of the African summer, the fields were varied hues of green and brown. 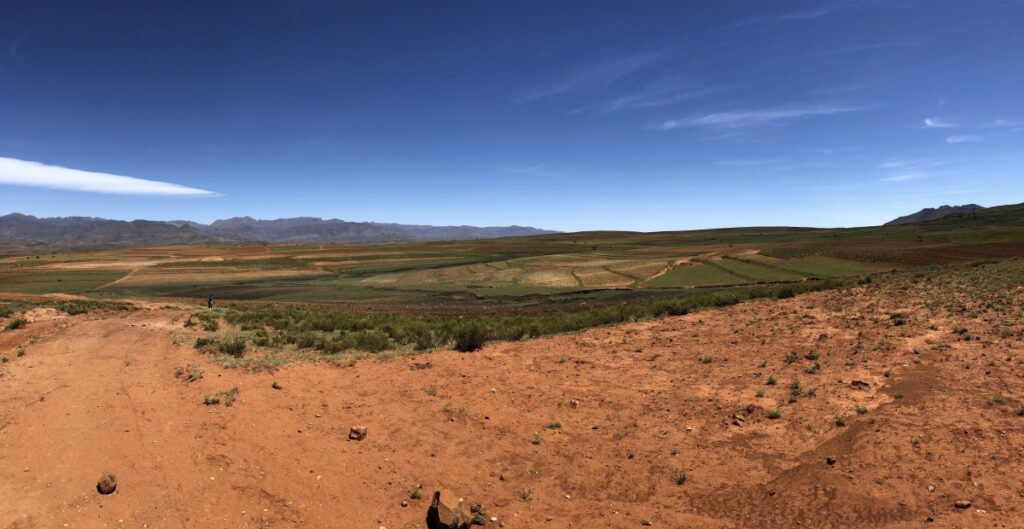 Even in the hot midday sun, the farmers worked the land plowing fields with horses in preparation for planting.

Our hike started out from the top of the village and wound through the fields in the valley below. 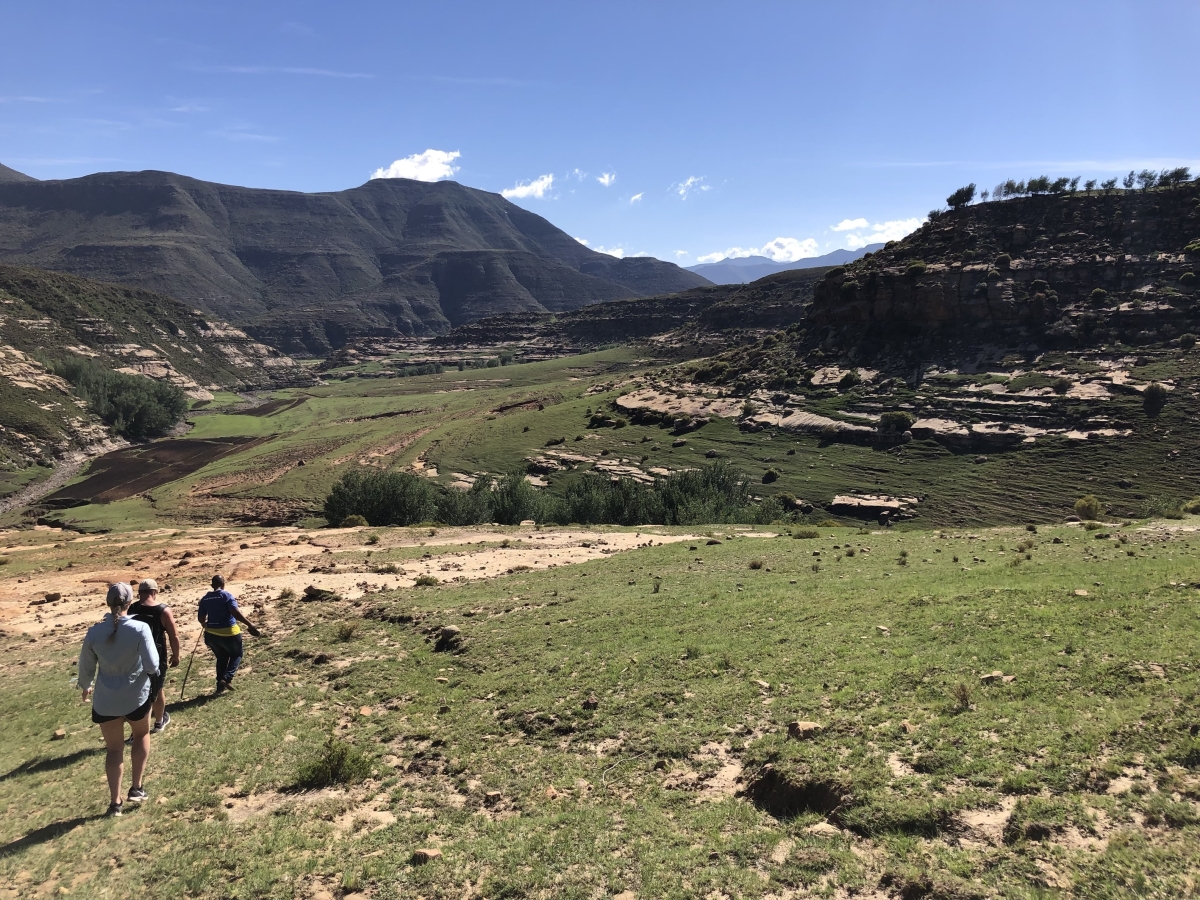 The guide was from the village (as all the guides are).  Along the way she pointed out landmarks and told us the local history. 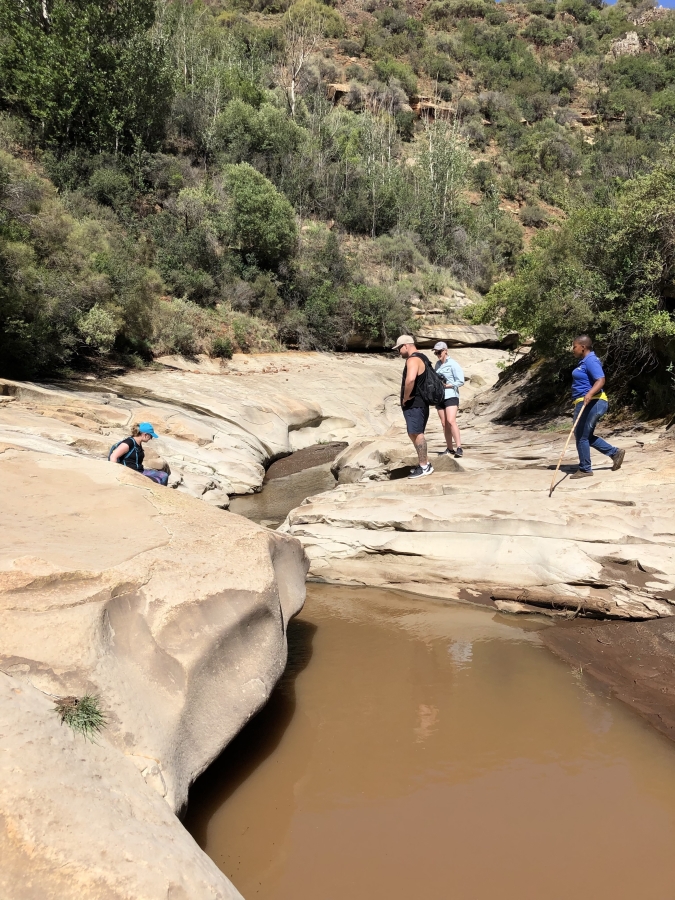 It was hot and slow going as we zigzagged back and forth over the river to our first destination – Botsoela Falls.

Up to the mid-19th century, zebras, wildebeests, ostriches, and lions could be found here.

However, hunting and deforestation have mostly eliminated the populations of large mammals. The last lion was killed in the 1870s. So now, you may find an occasional small antelope but mostly goats and sheep dot the landscape. 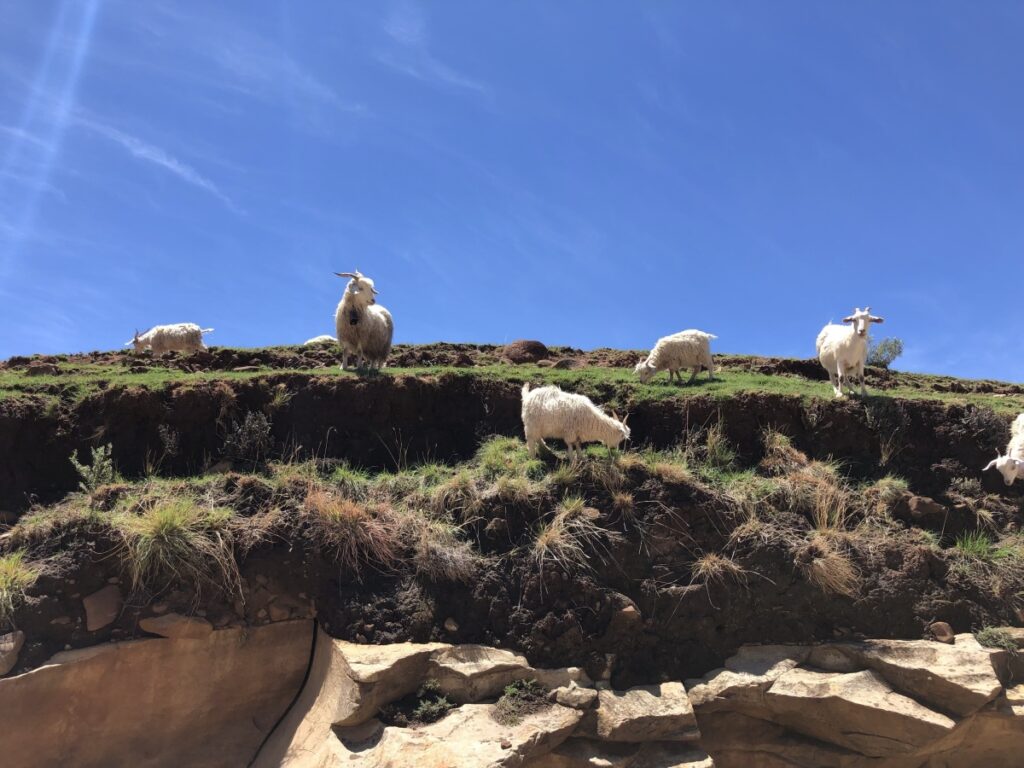 After a couple of hours’ walk, we scrambled up the steep path to the falls.

We were hot enough to hope for a swim. But the water level was at its mid-summer low. So a dip of the feet was all we got. 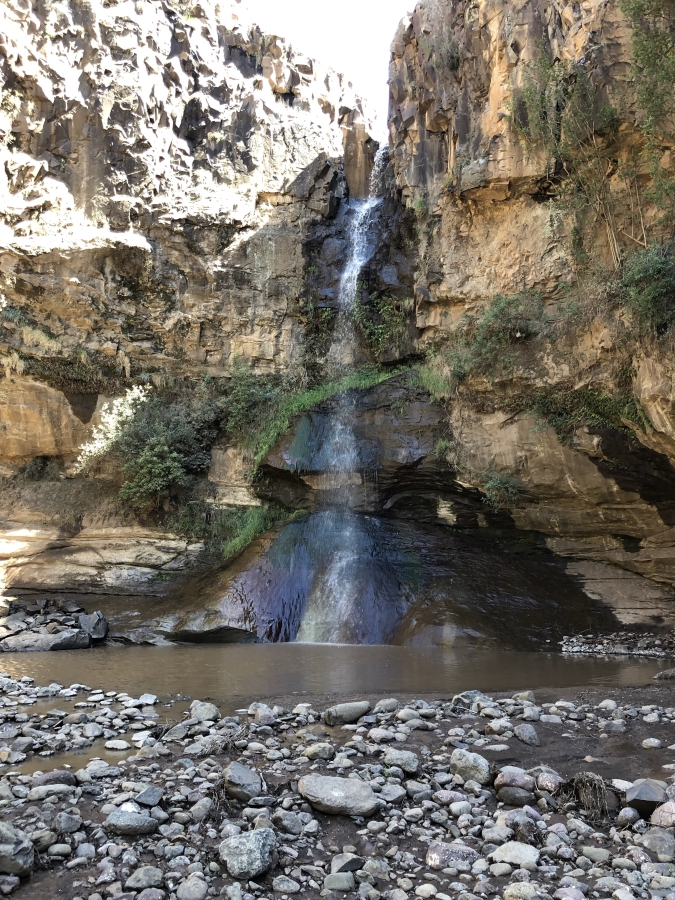 After a quick snack break, we headed off to the Bushman Caves about an hour’s walk back in the direction of the lodge.

By then it was the hottest part of the afternoon as we climbed over rocky hills past small clusters of houses. 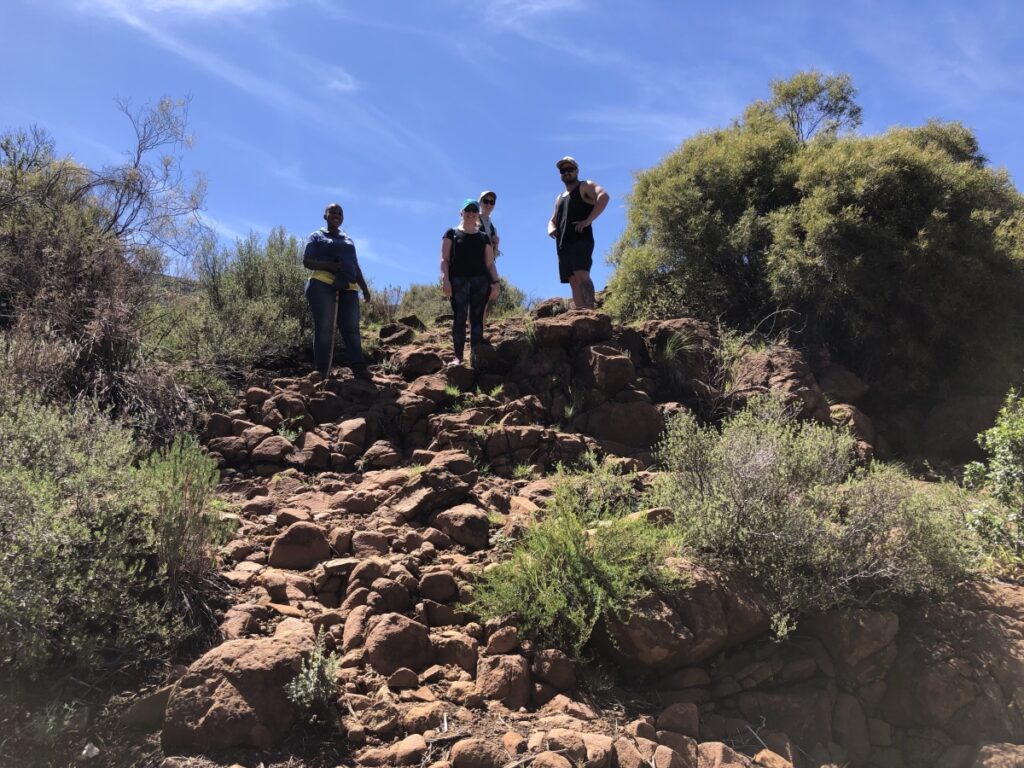 The last rocky ledge above the caves involved a descent down some hard scree over the lip of the canyon and onto the cliffside river trail.

It was just this side of dodgy. 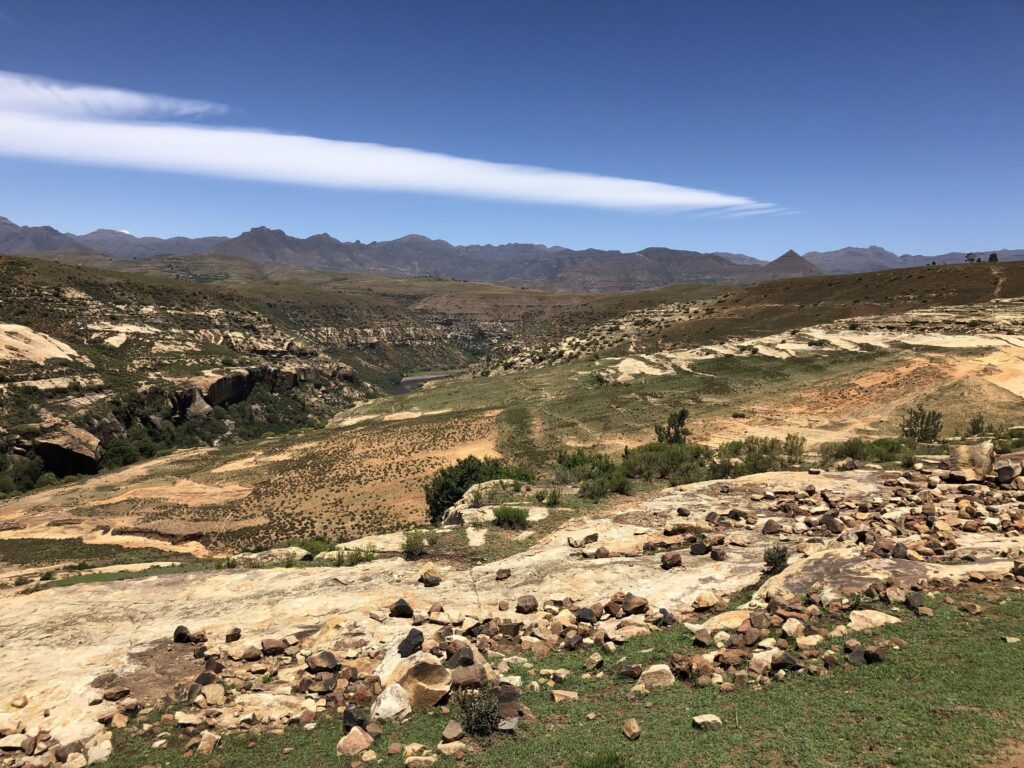 The narrow trail passed between boulders and a couple open holes where the gravel fell away to reveal a dizzying view of the river far below.

I held my breath and jumped. However, since I’d just had a truly humbling fear of heights experience a few days before in Drakensberg, these leaps seemed trivial in comparison.

On the way down the hard scree, some local kids joined our hike.

They had a fine time running up and down and circles around us as we cautiously made our way down the steep incline. Cheeky buggers. They made up for it later by singing for us in the Echo Cave – lined up and harmonizing like a well-rehearsed choir. After a few minutes, our guide politely shooed them away.

The cave paintings are well hidden on the side of the cliff.

I’m not sure you’d find them without a guide. There are a few different caves but we only visited two. One of the caves is deemed too dangerous to visit because it’s a tricky scramble across the river. A tourist fell on the way there awhile back and was severely injured. So the local guides won’t take you to them. Fine by me, I was impressed enough with those we saw. 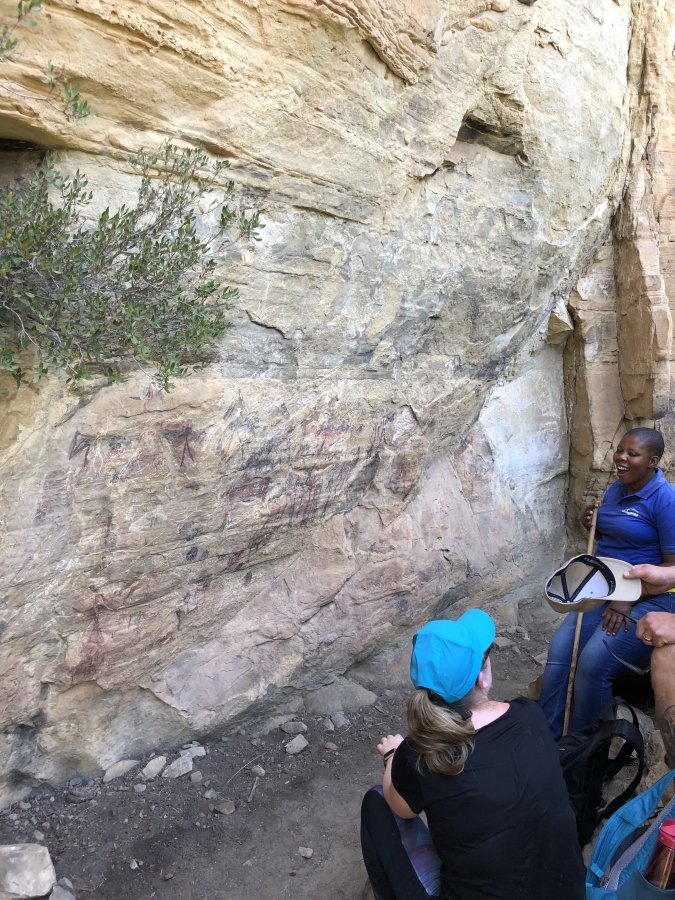 The paintings depicted hunters and long lost animals like giraffes and zebras.

We talked about just how different this place was not so very long ago. The drawings told stories of the hunt and how the people lived. It was fun to try and imagine the story behind each drawing. 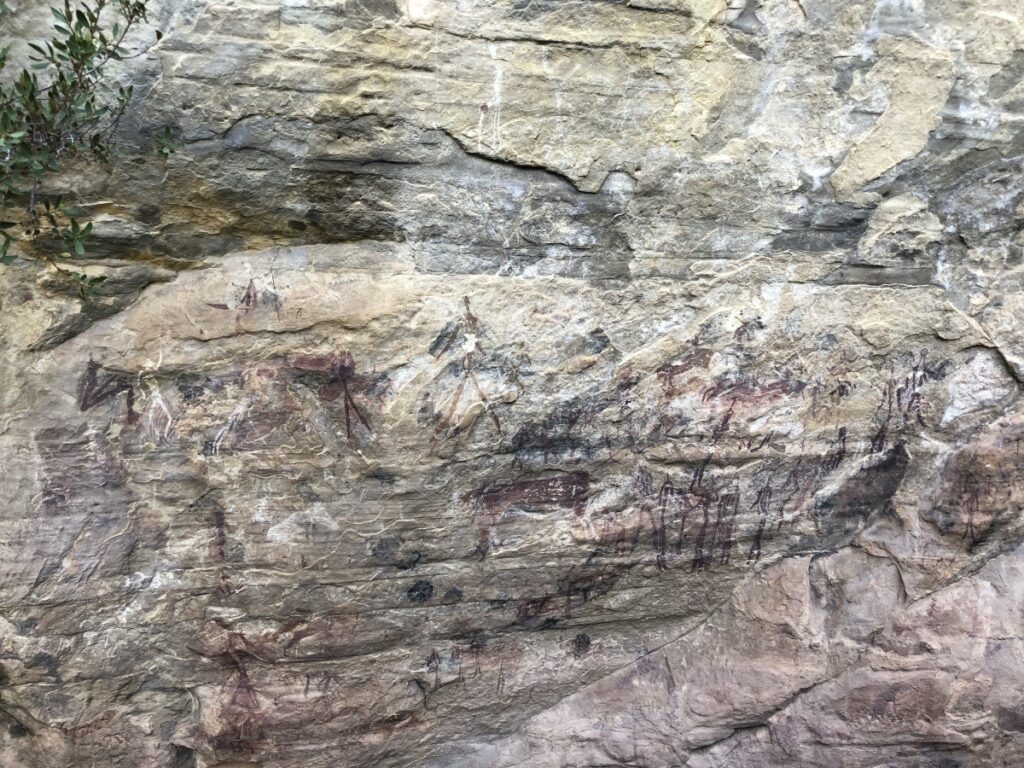 A couple of hot and sweaty hours later we got back to the bar at Malealea Lodge.

A nice cold one was waiting along with our African guide. As he looked at the fair-skinned Aussie who was now a painful shade of red, he chuckled and said, I see you’ve met our African sun today.

Magical Malealea, thank you for the hike. 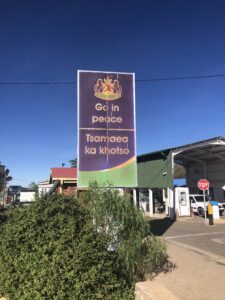 Have you been to Lesotho? I’d love to hear about your adventures in the comments.