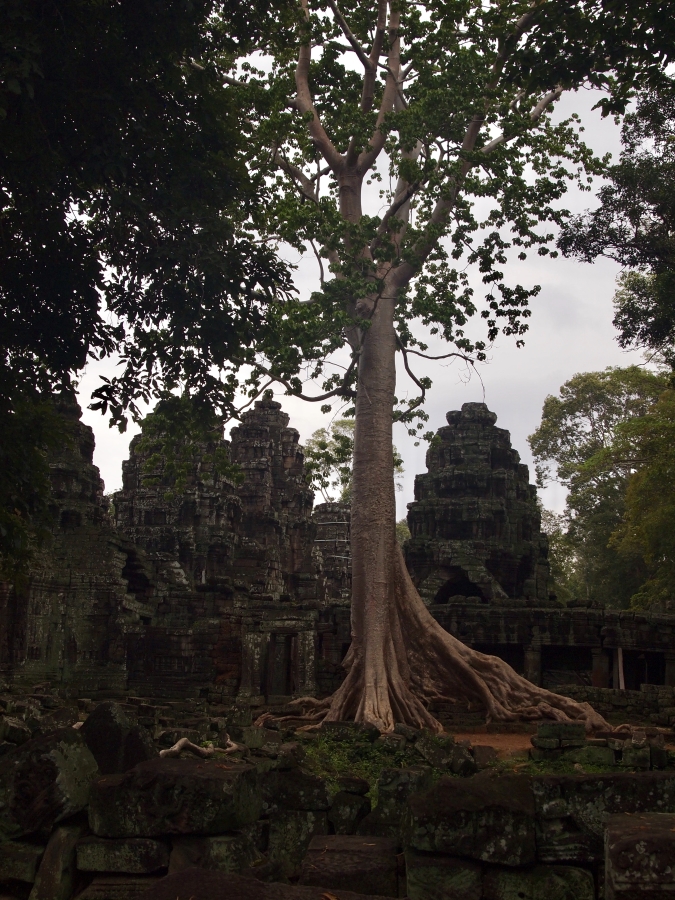 A temple is not an obvious hiking destination.

But when the temple is called Angkor Wat, you can rethink a lot of assumptions. For starters, Angkor Wat is only one of the many temples, pagodas, gates, necropolis, and stelae that comprise the Angkor complex. At 400 acres (160 hectares), this complex is the largest religious site in the world.

The Angkor complex is still very much in use. Some of the temples are sacred to Hindus while others are used as places of worship by Buddhists. The temple of Angkor Wat is sacred to both.

The Angkor complex is also a point of national pride to all Cambodians. Park entry is free to any Cambodian citizen as well as anyone who can prove at least partial Cambodian ancestry. You’ll see the locals gather in the evening around one of the many reservoirs or flock to the temples on the weekends wearing their best clothes. 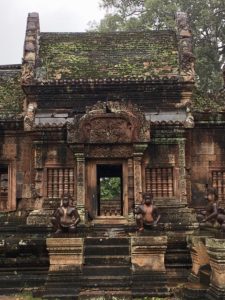 The Angkor complex was built between the 9th and 13th centuries. It was later abandoned and “discovered” by the French. Restoration efforts started in the early 20th century were halted by the civil war and subsequent rise to power of the Khmer Rouge. In 1992, the entire Angkor complex (including Angkor Wat) was designated a UNESCO World Heritage Site.

If the word “restoration” makes you think about smooth boardwalks and street lights, guess again.

Restoration at Angkor Wat is geared primarily toward structural stability. If you want go hiking among the temples of Angkor Wat, you’ll need a good pair of walking shoes and strong knees to access most of the temples. But you’ll be well rewarded for the climb. Every wall, column and lintel is decorated with stone carvings that have survived the ages. Maybe a kind security guard will show you marvels hidden behind the rubble.

The Angkor complex is also a wonderful example of the inexorable power of nature over man. There’s the famous Tomb Raider temple, Ta Prohm, that has literally been overrun by trees. But really all of the Angkor complex is vulnerable to the vagaries of the jungle that surrounds it.

To get a taste of that jungle, venture past the tour bus routes.

You’ll see monkeys, water buffalo and the skinniest cows I’ve ever encountered. FYI: you’ll also see a lot of poverty. The villages inside and outside the Angkor complex function without electricity or running water and the roads are more pothole than asphalt.

My favorite temple is Banteay Srei. The temple is sometimes called the Citadel of Women because, it’s said, the carvings are so delicate that only a woman could have made them. This temple is constructed of red sandstone, giving it the loveliest glow even in the pouring rain.

When hiking among the temples go a little further and visit Kbal Spean, home of the River of a Thousand Lingas.

A linga is a phallic symbol representing the Hindu god Shiva. Linga, its female counterpart yoni, and other carvings adorn the rocky riverbed.

That, in any event, is what my guidebook says. So, off we go, up the hill, clambering over rocks and up muddy slopes. It’s a 1.5 kilometer walk to the top. I’m not a good climber nor a very brave one. Luckily, there are signs every 100 meters to encourage me to go on. Also, a little rest spot every 500 meters.

When we get to the top, we see the river and a few lingas in the riverbed. To be honest, a bit of a letdown. We’re about to turn back when a security guard tells us we’re going the wrong way. We say that we’re looking for the waterfall and he decides to show us the way.

Not only does he guide us to the waterfall. He points out all the carvings along the way. The apsara dancing, the crocodile carved into a ledge, and the frog in the water. If we had come during the dry season, we would have seen Shiva himself lying at the bottom of the river.

But our security guard has one more good deed to do.

He can see how unstable I am trying to head downhill on slippery rocks. By contrast, he has no problem at all leaping from rock to rock in his flip flops. So he takes me by the hand and walks me all the way down the mountain. I guess that doesn’t make me much of a hiker. Just a lucky tourist.

Tips for hiking among the temples of Angkor Wat: 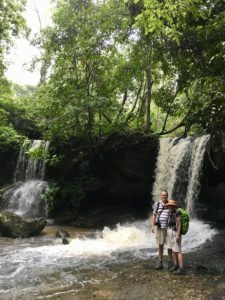